In the back alleys near Hastings Street in the Gastown area of Vancouver, there are a lot of street art pieces. When I was there, I saw a couple of pieces, like the one of a bear above, that were inspired by Coast Salish art  (for more information about this style, see the Google Arts & Culture gallery on Native American Art of the Northwest Coast: artsandculture.google.com/exhibit/ogKCBqM_vlZQLg).

These two pieces (the other one is shown in the gallery below and features a sun and orca whales) were painted by indigenous graffiti artist Larissa Healey (AKA Gurl Twenty Three).

The above mural, by the artist collective Cold World Media, is a street art remix of a famous painting by M.C. Escher: Hand with Reflecting Sphere (www.mcescher.com/gallery/italian-period/hand-with-reflecting-sphere/)

A few of the artworks in the gallery on this page are also by Cold War Media—the Prisoner Smoking a Cigarette, the Freedom mural and the one inspired by Michelangelo.

Gallery
Click on any of the below images and the image will open in gallery view.

Wildstyle (alley in the Gastown district) 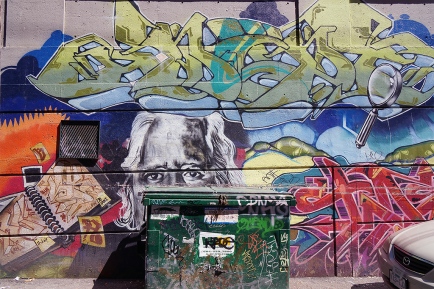 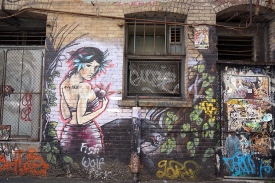 Portrait (alley in the Gastown district) 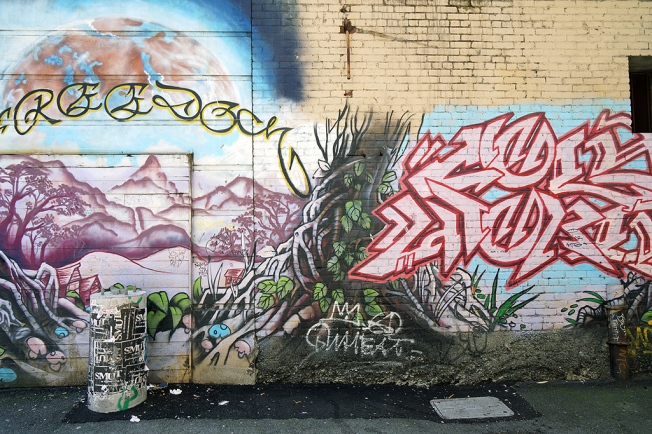 On a more recent trip (summer 2018), I came across these pieces:

This work by Ilya Viryachev was commissioned by PiDGiN, a restaurant in Gastown. The mural depicts various events in Vancouver’s history such as the gold rush of the mid-nineteenth century, the completion of the Canadian Pacific Railway (and the Chinese immigrants that provided much of the labor), the great fire of 1886, the 1907 Chinatown and Nihon Bachi riot, the great depression, the internment of Japanese during the Second World War and finally, at the far right, a Musqueam woman tearing up the up the Indian Act.

You can find more information at the restaurant’s website: www.pidginvancouver.com

They also produced this video:

This huge colourful mural, painted on six industrial silos by Brazilian artists OSMEGEOS (aka identical twin brothers Otavio Pandolfo and Gustavo Pandolfo), was created as part of the Vancouver Biennale. The 21-metre tall mural painted on the Ocean Cement manufacturing and distribution plant on Granville Island is part of a series of large-scale works entitled Giants that pair have painted around the world. This piece is notable because the painting of each figure wraps all the way around its silo.

You can see a time-lapse video of the painting process:

I noticed this interesting mural by the AA Crew (Virus, Tars, and Dedos) in a downtown back alley (I think this area still counts as downtown Vancouver; I am not very familiar with the city).

This block-long mural, entitled Vancouverites, celebrates famous people who are from Vancouver (or who have some kind of association from the city). It was a created by a team led by local artists Vince Dumoulin, Milan Basic and Manuel Di Ritawas. It has already recently painted over by the city in preparation for a new mural.

On the left of the following photo is part of the war remembrance section. The woman second from right is the late actress and dancer Yvonne de Carlo. if you know who the other people are, let me know. Many of the subjects in the mural are identified on this page: Beatty Street Mural Vancouveritescreatorsvancouver.com/vancouver-x-by-mural (you can also see more photos there).

The war remembrance statue in the middle of the next photo is the Angel of Victory, which was sculpted by Coeur de Lion MacCarthy

And here is a portrait of Terry Fox, who became a Canadian icon in 1980, when, after losing one of his legs to cancer, he attempted to run across the country to raise awareness and funds for cancer research.

If you know more about the artists or artwork on this page, let me know so I can flesh out the information on this page.

This section includes discussion questions, an art challenge and links to online photo galleries and websites.

Street Art of Vancouver (A Walking Tour) (by Joanne Hastie)

Design a mural that features the past heroes in your community (like the Beatty St. mural).

~photos and text by longzijun

Return to Artjouer’s Gallery of Artists